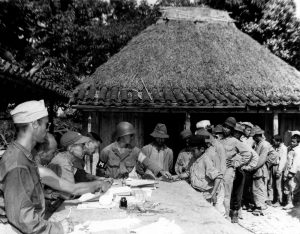 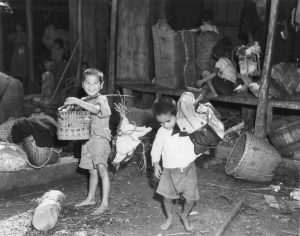 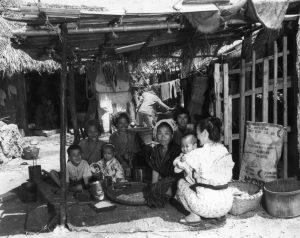 From the War Years to Postwar Reconstruction

Okinawa Prefecture became the site of ground battles during the last World War, where all the people of the prefecture were mobilized, resulting in the loss of more than 200,000 precious lives and irreplaceable cultural heritage. Those who went through horrific battlefields and survived with the grief of losing their loved ones were deeply scarred both physically and mentally. They lost all their means of livelihood and possessions they needed to survive.

After landing on Okinawa, the US military established civilian and POW camps to house local residents and soldiers/conscripts separately. Most of the residents were rounded up with only the clothes they were wearing. The US military provided minimal food, clothing, tents, and medical supplies, but food shortages were severe. In addition, people who had been injured on the battlefield were sent to internment tents one after another. Because of inadequate treatment, many people died after the war from worsening wounds, malaria and other infectious diseases, malnutrition, and other causes.

From October 1945, some land no longer needed by the US military was released, and Okinawans were allowed to return to their former residences from various internment camps. The first thing they saw when they stepped onto their hometown’s soil for the first time in months was their war-torn homeland and the remains of those whose bodies had simply been left in the open. Tearful at the sight of the victims whose appearances had changed beyond recognition, people collected the remains, many of which could not be identified, and erected a cenotaph.

In order to rebuild and restore their homelands destroyed by the war, people had to start by securing food for survival, removing unexploded ordnance and weapons remnants, and building houses for them to live in. Everything had to start from scratch. However, their hometowns were surrounded by barbed wire fences as US military bases, including military ports and airfields, and were inaccessible.

Despite these difficult circumstances, the Okinawan people rose from the depths of despair and moved forward step by step. Since rations from the US military were not enough to provide for their daily needs, the Okinawans supported themselves through gaining “senka,” which literally means battle results, where they skimmed off US military supplies, as well as through working for the US military. In addition, with regard to tools necessary for daily life, they skillfully modified and created household items by using shell casings and weapon remnants scattered around the surrounding areas. As for schools, there were no school buildings, so postwar education began in “aozora kyoshitsu,” (classrooms under the open sky, or classrooms without roofs). People worked hard to rebuild their hometowns, overcoming the sorrow and anguish deeply engraved in their hearts. 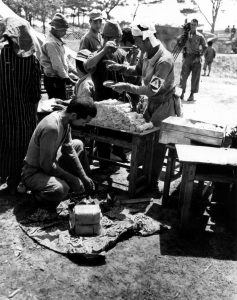 This website showcases video testimonies of 30 war survivors as they move from the prewar period toward postwar reconstruction. The testimonies, which describe the experiences of those who survived the war in various places, ranging from the main island of Okinawa and its remote islands to mainland Japan, Taiwan, Saipan, Manchuria, and elsewhere, and how they worked tirelessly toward postwar reconstruction, allow us to feel the process of the restoration of a devastated society and the breath and energy of those who crawled out of despair.

Today, as the number of people who experienced the war dwindles and the issue of passing on the memories of those days becomes more and more important, we need to look back once again at the reality and lessons of the war and the resilience of the people who survived the war and how they took on the challenge of reconstruction, and in doing so reexamine their footprints. 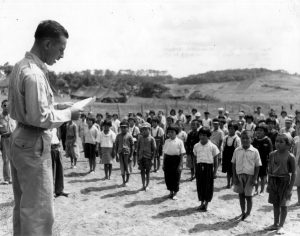